Copyright 2021 - All Right Reserved
Our website publishes news, press releases, opinion and advertorials on various financial organizations, products and services which are commissioned from various Companies, Organizations, PR agencies, Bloggers etc. These commissioned articles are commercial in nature. This is not to be considered as financial advice and should be considered only for information purposes. It does not reflect the views or opinion of our website and is not to be considered an endorsement or a recommendation. We cannot guarantee the accuracy or applicability of any information provided with respect to your individual or personal circumstances. Please seek Professional advice from a qualified professional before making any financial decisions. We link to various third-party websites, affiliate sales networks, and to our advertising partners websites. When you view or click on certain links available on our articles, our partners may compensate us for displaying the content to you or make a purchase or fill a form. This will not incur any additional charges to you. To make things simpler for you to identity or distinguish advertised or sponsored articles or links, you may consider all articles or links hosted on our site as a commercial article placement. We will not be responsible for any loss you may suffer as a result of any omission or inaccuracy on the website.
Home Headlines Bank of England to raise rates by 50bps again to tame inflation: Reuters Poll
Headlines

LONDON (Reuters) – The Bank of England looks set to hike borrowing costs by another 50 basis points next week, although it may opt for an even bigger move, a Reuters poll found, adding to the woes of indebted households already facing a cost of living crisis.

That is despite some inflation expectations falling after new Prime Minister Liz Truss announced an energy support package last week, with inflation now likely to peak as much as five percentage points lower than earlier forecast.

Other central banks have been acting more aggressively, including the U.S. Federal Reserve, the European Central Bank and the Bank of Canada.

The remaining seven economists polled said the BoE would opt for a 75-basis-point hike next week as it battles to contain inflation running at more than five times its 2% target. Inflation was 10.1% in July, the highest since February 1982.

But Truss’ power tariff cap and planned tax cuts could prove inflationary, and Bank Rate was now expected to peak at a higher level than previously thought.

“While we don’t expect the MPC to reach consensus on anything bigger than a 50bps hike at this stage, the case for further outsized rate hikes remains strong, if not stronger,” said Sanjay Raja at Deutsche Bank.

The BoE was expected to follow next week’s increase with another 50 basis point lift in November and 25 basis points in December, taking Bank Rate to 3.00%, where it will stay until at least October.

In an August survey, Bank Rate was expected to top out at the end of this year at 2.50%.

When asked how the risks to that peak interest rate forecast were skewed, 18 of 19 respondents to an extra question said it would be higher or significantly higher. Only one said the risk was it would be lower.

“In fact, one of the paradoxes of large fiscal support is that the Bank may now need to tighten monetary policy by more than would otherwise be the case. An increase to 4% is now possible,” said Neil Shearing at Capital Economics, who has been near the top end of those expectations for some time.

Despite expectations for hefty rises from the central bank, Britain’s struggling pound will not regain its losses against the U.S. dollar anytime soon due to an expected recession and increased government spending, another Reuters poll found. That will add to price pressures through more expensive imports. [GBP/POLL] 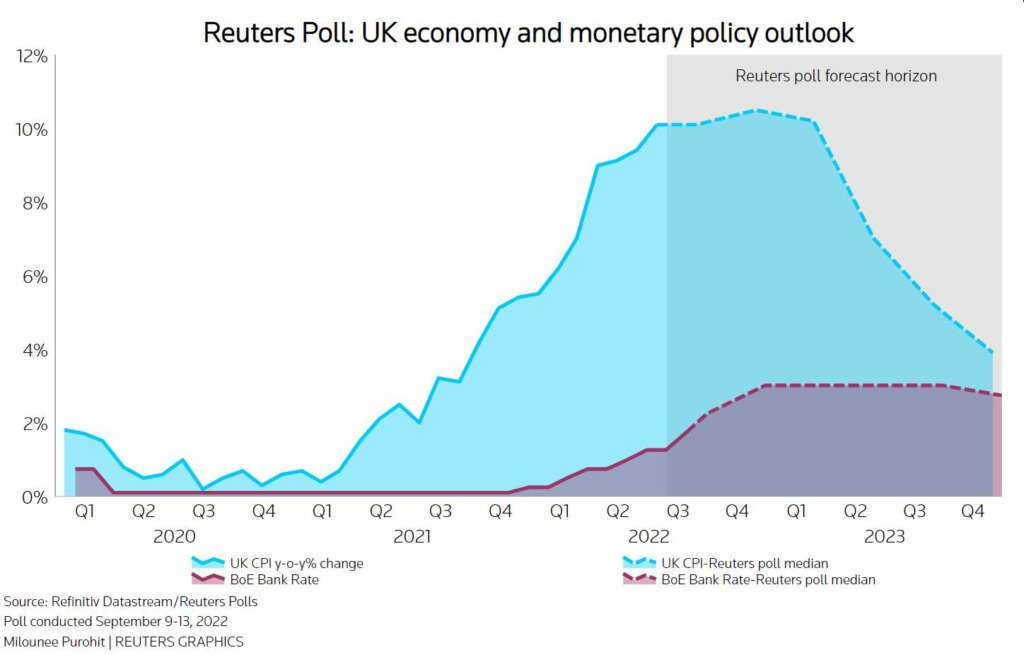 Inflation was now seen peaking at 10.5% next quarter, down from the 12.8% forecast just ahead of Truss’ announcement and the 11.4% expectation in August’s poll but wasn’t seen at the Bank’s target until 2024 at least.

Surging prices have deterred consumers and the economy grew less than expected in July, raising the risk it is already in a recession, official data showed on Monday.

When asked about the likelihood of a recession within a year the median was 75% and within two years it was 80% although a majority of respondents to another question said it would be long and shallow.

Quarterly growth forecasts for next year were largely revised down and the economy was predicted to contract 0.2% across 2023, a turnaround from the 0.2% growth expected in last month’s poll.

Britain’s jobless rate has hit its lowest since 1974 but the drop was due mostly to a fall in the size of the workforce and that shortage of candidates for jobs meant pay growth rose more than expected.

The BoE’s meeting was moved back a week following the death of Queen Elizabeth.

(For other stories from the Reuters global economic poll:)

UK unemployment hits lowest since 1974 but jobs boom is fading

From boom to bottom and now big change: Renault and Nissan reshape alliance