Asset Digest
Asset Digest
Saturday, February 4, 2023
Asset Digest
Asset Digest
Copyright 2021 - All Right Reserved
Our website publishes news, press releases, opinion and advertorials on various financial organizations, products and services which are commissioned from various Companies, Organizations, PR agencies, Bloggers etc. These commissioned articles are commercial in nature. This is not to be considered as financial advice and should be considered only for information purposes. It does not reflect the views or opinion of our website and is not to be considered an endorsement or a recommendation. We cannot guarantee the accuracy or applicability of any information provided with respect to your individual or personal circumstances. Please seek Professional advice from a qualified professional before making any financial decisions. We link to various third-party websites, affiliate sales networks, and to our advertising partners websites. When you view or click on certain links available on our articles, our partners may compensate us for displaying the content to you or make a purchase or fill a form. This will not incur any additional charges to you. To make things simpler for you to identity or distinguish advertised or sponsored articles or links, you may consider all articles or links hosted on our site as a commercial article placement. We will not be responsible for any loss you may suffer as a result of any omission or inaccuracy on the website.
Home Headlines Biotech stocks pin bounce back hopes on M&A boost
Headlines

By Amruta Khandekar and Leroy Leo

(Reuters) – Plunging valuations have made biotech companies tempting acquisition targets for cash-rich Big Pharma and a flurry of deals is just what the battered sector needs to turn a corner.

Pfizer’s $5.4 billion acquisition of Global Blood Therapeutics, which was announced on Monday, is the fourth deal in the sector since the pharma giant bought Biohaven for $11.6 billion in May, adding to optimism that large drugmakers are back in the market to pick up cheaper firms.

Industry experts predict biotech firms that are closer to getting their product to market or already have a drug approved are likely to become M&A targets for large drugmakers, some of whom are staring at patent expirations of their cash cow drugs. 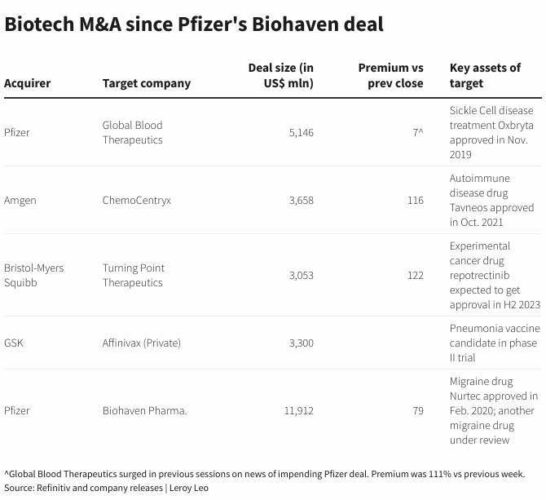 “(There have been) acquisitions of companies that have late-stage assets and also the theme of large-cap companies keeping an eye on mid-caps approaching blockbusters,” RBC Capital Markets analyst Gregory Renza said. “So needing to replenish portfolios and finding companies like those are key.”

Biotech company stocks have been battered in the past few months as investors booked profits after a sharp rise in valuations in 2021, with the rout exacerbated by a dearth of large deals and lack of positive data from clinical trials.

The Nasdaq Biotechnology index fell nearly 28% in the year till the Pfizer-Biohaven deal was announced in May. Since then, the index is up over 18%.

The SPDR S&P Biotech ETF is also up 34% in that period, while iShares Biotechnology ETF is up about 19%. 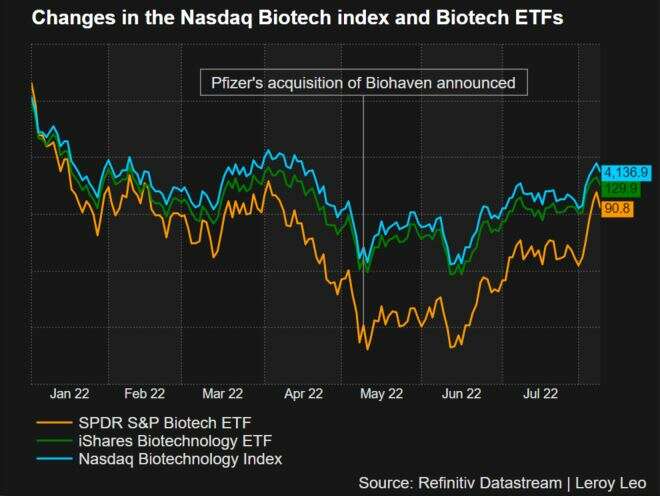 “Pfizer’s move put boards across big pharma on notice that if you’re not in the market buying these companies while they’re cheap, your competitors will,” Thomas Hayes, chairman and managing member of Great Hill Capital in New York, said.

Still, not all analysts are convinced the bottom has been reached for these stocks and believe there is still a long way to go for biotechs, especially considering the risky nature of the business.

Sentiment around the beaten-down sector has improved in the past month.

About $86 million was poured into iShares Biotechnology ETF in July, compared with $7 million in June, following outflows in the two preceding months, according to Refinitiv Lipper data.

“The fundamentals are strong as ever, the valuations have corrected and the acquirers have a boatload of money,” said Lee Brown, global healthcare leader for investment research firm Third Bridge. “So it’s sort of like – let’s party.”

Sterling falls vs dollar as focus turns to UK data