Asset Digest
Asset Digest
Friday, February 3, 2023
Asset Digest
Asset Digest
Copyright 2021 - All Right Reserved
Our website publishes news, press releases, opinion and advertorials on various financial organizations, products and services which are commissioned from various Companies, Organizations, PR agencies, Bloggers etc. These commissioned articles are commercial in nature. This is not to be considered as financial advice and should be considered only for information purposes. It does not reflect the views or opinion of our website and is not to be considered an endorsement or a recommendation. We cannot guarantee the accuracy or applicability of any information provided with respect to your individual or personal circumstances. Please seek Professional advice from a qualified professional before making any financial decisions. We link to various third-party websites, affiliate sales networks, and to our advertising partners websites. When you view or click on certain links available on our articles, our partners may compensate us for displaying the content to you or make a purchase or fill a form. This will not incur any additional charges to you. To make things simpler for you to identity or distinguish advertised or sponsored articles or links, you may consider all articles or links hosted on our site as a commercial article placement. We will not be responsible for any loss you may suffer as a result of any omission or inaccuracy on the website.
Home Headlines No messing around with red-hot inflation: Five questions for the ECB
Headlines

No messing around with red-hot inflation: Five questions for the ECB

LONDON (Reuters) – The European Central Bank meets on Thursday and appears in no mood to slow the pace of aggressive interest rate hikes given red-hot inflation — even as the economic outlook darkens.

It has jacked up rates by a total 125 basis points (bps) since July, the fastest pace of policy tightening on record.

Recession risks are unlikely to stand in the way for now, but markets are looking for signs on when a pause might come.

Here are five key questions on the radar for markets.

1/ What will the ECB do this week?

Economists polled by Reuters anticipate a 75 bps rate increase to 1.5%, a view reflected in market pricing. Policymakers have argued for a large rate hike, with most specifying a preference for 75 bps.

Investors will also look to ECB boss Christine Lagarde for guidance on how the ECB views the trade-off between recession risks and inflation, and when it might pause tightening.

“It makes sense to expect a 75 bps rate hike, signals about the ECB reducing its balance sheet and changing rules about the TLTRO to reduce excessive liquidity,” said Deutsche Bank’s Global Head of Rates Research Francis Yared. “What is unclear is how much of all this the ECB will announce (this week).” 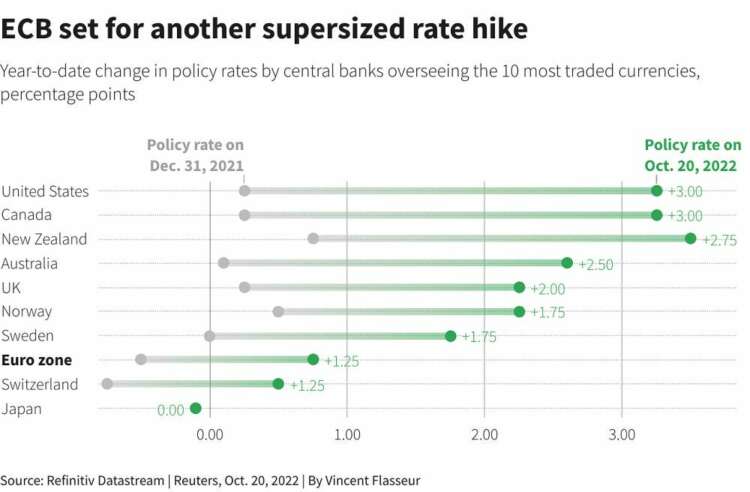 2/ Is there any indication inflation is peaking?

Economists say it’s too early to call a peak in inflation but the chances of one arriving soon are growing. Inflation has accelerated to almost 10%, a level not seen in some euro zone countries for over 70 years.

One reason for optimism is that European gas prices are down 65% from a peak in August.

While an inflation peak may be close if there are no additional shocks from the war in Ukraine, the retreat will be slow initially, ECB policymaker Bostjan Vasle believes.

Another problem is that inflation is broad so even when the headline figures fall, underlying price growth will remain uncomfortably high.

The inflation peak is crucial for whether policymakers will need to push rates beyond the neutral setting – where they neither stimulate nor slow growth — a rate generally pegged at between 1.5% and 2% but that some policymakers think is too low. 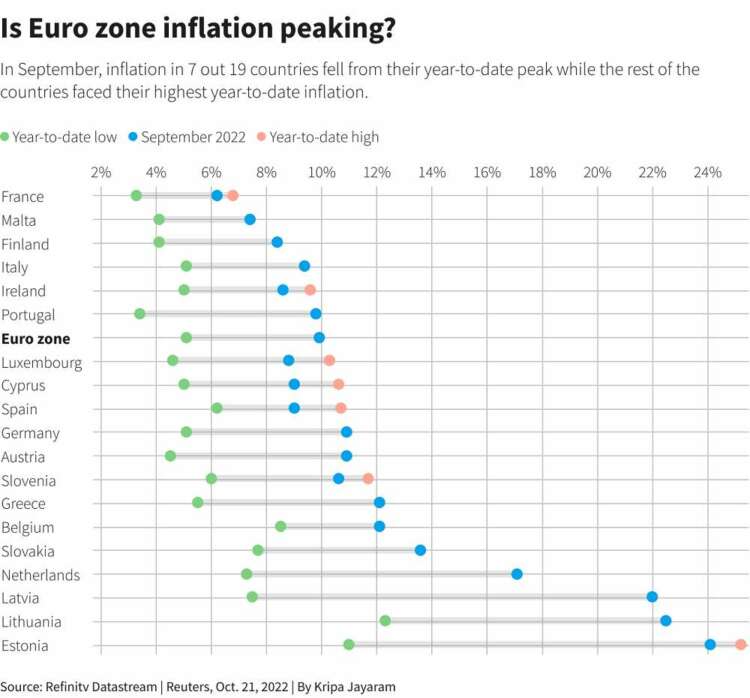 Not just yet. But the ECB could tweak its language on reinvestments and provide more details in coming months.

The next key policy debate is on how to run down the more than 5 trillion euros worth of bonds on the ECB balance sheet in a process called quantitative tightening (QT). 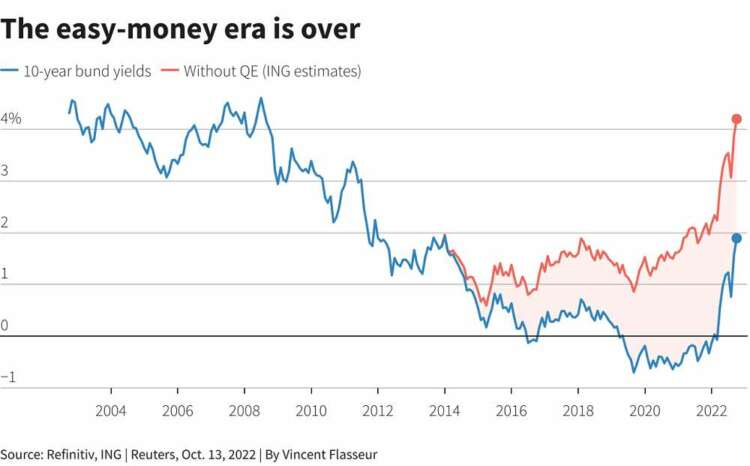 4/ Is the ECB giving away cash to banks and what will it do about it?

Euro zone banks sit on 2.1 trillion euros of cash handed out by the ECB at ultra-low, sometimes even negative rates, aimed at boosting the economy.

But quick and big rate hikes mean banks can park this cash back at the ECB, earning a risk-free profit, irking policymakers who view it as gaming the system.

Policymakers are believed to be closing in on a deal to change rules governing the loans to banks, a move that would shave tens of billions of euros off in potential banking profits. A decision could come on Thursday. 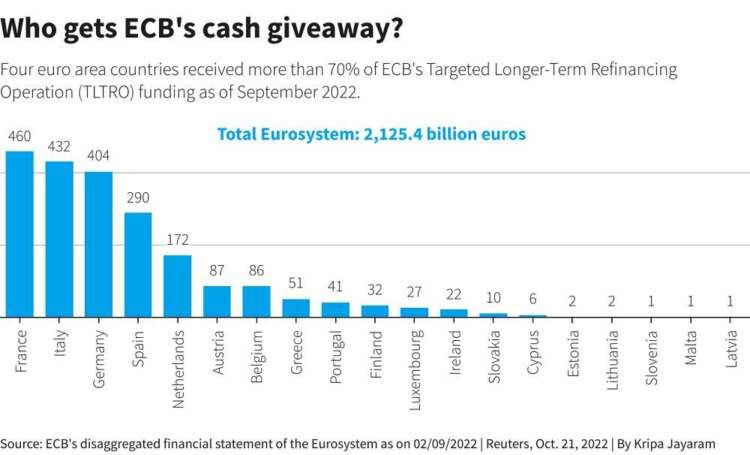 5/ How worried is the ECB about financial instability?

Aggressive rate hikes from major central banks and a rout in British bonds have sparked concern about financial instability.

The International Monetary Fund says financial stability risks have risen “substantially” and Lagarde has warned that markets may be overly optimistic about the economic outlook, raising the risk of an abrupt market correction.

“The critical issue for markets is financial stability,” said Flavio Carpenzano, fixed income investment director at Capital Group, although he doesn’t expect the ECB to address it directly. 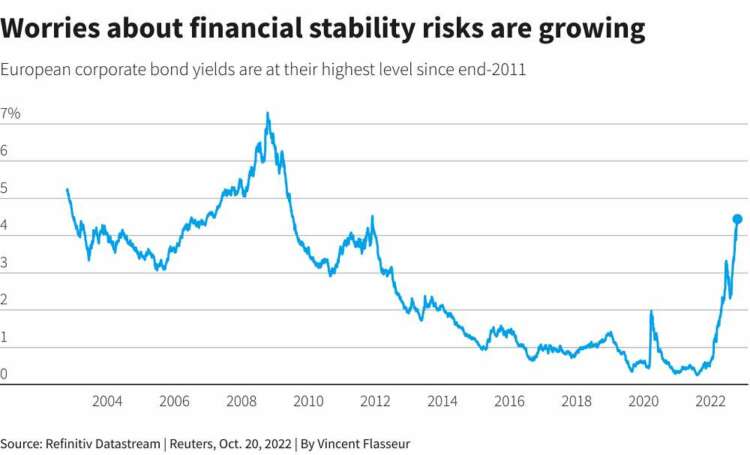 (Reporting by Dhara Ranasinghe in London and Stefano Rebaudo in Milan; Graphics by Kripa Jayaram and Vincent Flasseur; Editing by Tommy Reggiori Wilkes and Andrea Ricci)

Arrow partners with POPX to automate operations and integrate acquisitions