Home Headlines Iran deal a wild card for oil market strained by supply risks – Reuters poll
Our website publishes news, press releases, opinion and advertorials on various financial organizations, products and services which are commissioned from various Companies, Organizations, PR agencies, Bloggers etc. These commissioned articles are commercial in nature. This is not to be considered as financial advice and should be considered only for information purposes. It does not reflect the views or opinion of our website and is not to be considered an endorsement or a recommendation. We cannot guarantee the accuracy or applicability of any information provided with respect to your individual or personal circumstances. Please seek Professional advice from a qualified professional before making any financial decisions. We link to various third-party websites, affiliate sales networks, and to our advertising partners websites. When you view or click on certain links available on our articles, our partners may compensate us for displaying the content to you or make a purchase or fill a form. This will not incur any additional charges to you. To make things simpler for you to identity or distinguish advertised or sponsored articles or links, you may consider all articles or links hosted on our site as a commercial article placement. We will not be responsible for any loss you may suffer as a result of any omission or inaccuracy on the website.
Headlines

(Reuters) – A looming EU embargo on Russian oil is expected to exacerbate supply tightness and keep prices in triple digits this year unless there is a return of Iranian barrels, a Reuters poll showed on Wednesday.

A survey of 41 economists and analysts forecast benchmark Brent crude would average $103.93 a barrel this year, down from a forecast of $105.75 in July but above its current $100 trading level.

Oil prices have come off highs in March of nearly $140 on recession fears, but concerns about supply remain at the forefront, analysts said.

“Also, ending sales from the strategic oil reserves of OECD countries will remove more than 1 mbpd of supply from November, pointing to tighter markets at the end of the year.”

Most buyers have been cutting back on imports of Russian oil products since Moscow’s invasion of Ukraine, with the EU sanctions due to tighten later this year and a full ban agreed from February 2023.

“However, if and when the market realises that Russia is still able to shift exports to other regions, oil prices will retreat,” said John Paisie, president of Stratas Advisors.

Russia’s supplies to Asia as well as to some African states are growing, as buyers snap up discounted oil shunned by Western countries. 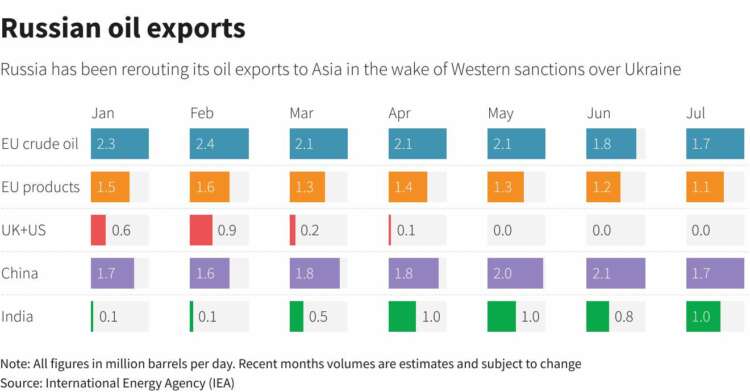 Top oil exporter Saudi Arabia last week said that the OPEC+ group of oil-producing nations may need to reduce output to balance the market, leaving traders anxious ahead the group’s meeting on Sept. 5.

“The wild card is Iran nuclear deal, but it will likely have a knee jerk reaction on oil price rather than a sustained one,” said DBS Bank analyst Suvro Sarkar.

If the deal is implemented, analysts see Iran adding as much as 2 million bpd to the market in 6-12 months. 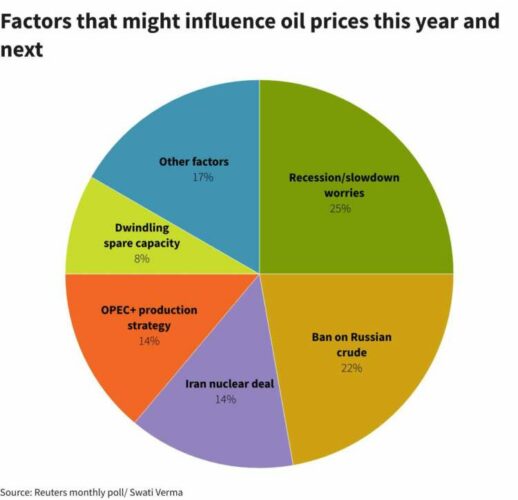 (Graphic: Factors that might influence oil prices this year and next, https://graphics.reuters.com/OIL-PRICES/POLL/zjpqkrqjrpx/chart.png)

(Reporting by Swati Verma in Bengaluru; editing by Noah Browning and Jason Neely)

Historic crown to be modified for King Charles’s...